The Chief of Staff of the Minister of Health, Public Hygiene and Universal Health Coverage, Dr Koffi Aka Charles, proceeded on Saturday March 26, 2022, to the official investiture of the “Fan club Dimba” at the Espace public of the sub-prefecture of Loviguié 2.

Politics: A “Dimba Fan Club” is created in Loviguié 2 to support its development actions

School infrastructure, health centers, automation projects for women and young people, electrification, dr inking water supply, road reshaping, construction of water towers and gendarmerie brigades in Agnéby-Tiassa, are all actions that led to the birth of this fan club.

“Loviguié 2 could not stay on the sidelines of everything that is happening. This is why we have decided to come together to support integrated development. And, today’s meeting responds to the concern to better inform our parents to follow the President of the Regional Council in his actions. And so, we want their full support,” said Attro Kouaho Charles, president of the organizing committee.

Same story with the newly invested president, Théodore Menet Maho, who returned to the actions of Minister Dimba N’Gou Pierre, since his accession to the head of the Regional Council.

“We would like to thank from the bottom of our hearts our brother who accepted that the fan club bears his name and who kindly supported the population in this local development adventure in the Agnéby-Tiassa region. Indeed, each of us must realize that development is everyone’s priority. Each of us has a potential to value and put it to the benefit of the greatest shadow. This is why, I call on everyone not to stay and marry the activities of the Dimba Fan club”, he pleaded. 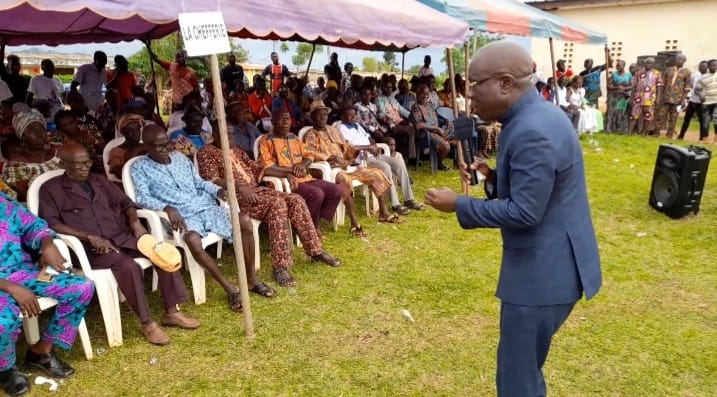 “This ceremony is a real commitment to our son, brother, friend and above all great leader of our region, Minister Dimba. It is with joy that I accept the heavy task of carrying the message of harmony, fraternal union, self-sacrifice at work and excellence, advocated by the minister, ”committed Menet Théodore.

The sponsor of the ceremony, Dr. Koffi Aka Charles, welcomed the initiative. “I would like to say that it won’t be easy and that you have to arm yourself with a lot of courage. I want to encourage you Mr. President and those who accompany you, that you have made the right choice and promise to always be by your side. Go everywhere to reach as many people as possible for their cause,” he said.

Continuing, the emissary of the Minister of Health, urged people to turn their backs on ominous birds. “Let’s stop being manipulated. We are rather moving in the direction of development, peace and living together,” concluded the sponsor. Created in 2018, the Dimba de Loviguié 2 Fan Club has around 300 members from all social strata.