In the middle of the campaign for the presidential election, the candidate of the Reconquête party Eric Zemmour was traveling in the Bouches-du-Rhône this Saturday, April 2. And the least we can say is that this release did not go as planned. Zinedine Zidane’s brother could even testify to this.

Eric Zemmour’s travels never go smoothly. While he went to the Bouches-du-Rhône this Saturday, April 2 to meet the inhabitants of the department, the candidate of the Reconquête party, who is in the middle of the campaign for the presidential election, was somewhat heckled. And not by anyone! But before that, Eric Zemmour had already chained a few escapades.

First of all, he started by going to an illegal flea market in the 15th arrondissement of Marseille. A stroll in the middle of some of his close collaborators during which he declared that it was necessary “to clean all that, physically and to clean the people who do all this traffic”. How? ‘Or’ What ? By “sending them back where they come from because most of them are illegal immigrants. We must send them home and not leave them here, it’s simple, ”continued the far-right candidate to the press.

Asked about the famous phrase that Nicolas Sarkozy had said about the suburbs, he took pleasure in outbidding: “The Karcher? More than the Karcher!”. And inevitably, Eric Zemmour drew the wrath of many of the inhabitants present on the spot. Before continuing on his way to the city of La Granière, whose visit was quickly dispatched because “security was on the line”, according to Alex Sulzer, a political journalist from the newspaper Le Parisien.

Eric Zemmour’s trip to the Bouches-du-Rhône ended with a football demonstration on the pitch of the Aix-en-Provence futsal club. But then again, nothing would have gone as planned. While the manager of the hall of this sports center belonging to Zinédine Zidane would not have been informed that the reservation had a political purpose, an incredible scene would have occurred.

As Alex Sulzer told, confirmed by a video published by a BFMTV journalist, the brother of the French world champion, Nourredine Zidane, would have intervened in person to ask the presidential candidate to leave the field immediately. . A totally amazing scene.

É.Zemmour on a football pitch in Zinedine Zidane’s Futsal club. But the candidate’s team did not warn of the presence of cameras, explain the officials. É.Zemmour is kicked out by Nourredine Zidane, the player’s brother. The sequence is cancelled. | @BFMTV https://t.co/c3iYbECl95 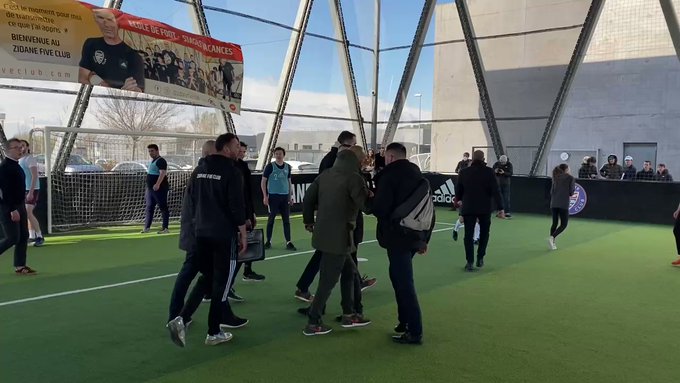