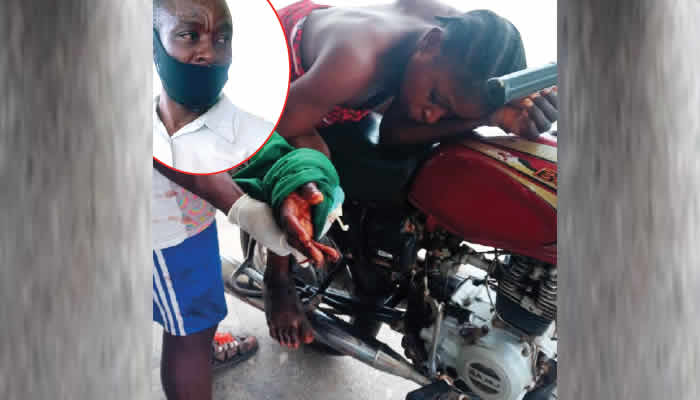 Few minutes after the attack on the Abegana IDP camp, an Island in Makurdi called Chile Island was also attacked by suspected herdsmen. One of the injured persons is Mbapuum Targuma, a mother of five. She was writhing in pain as she waited to be taken to the hospital. Her brother-in-law, Denen Guntu who rushed her to Benue State University Teaching Hospital, Makurdi speaks with JOHN CHARLES

Is she a victim of the attack on the Abegana IDP camp?

No, she lives at Chile Island in the Makurdi Local Government Area with her husband and children. She is the wife of my brother.  I rushed her to the hospital because of her condition. She has five children.

How did you get to know of the attack on your brother and family?

My brother lives in Chile community with his family as I said before he called to inform me that they were attacked by herdsmen.

Chile is an Island in Makurdi, the community was attacked at about 3am on Tuesday (last week) by  Fulani herdsmen. Incidentally, these attackers also live with the people in Chile Island.

She doesn’t understand English language and besides, you can see how she is in severe pain, so she may not be able to respond to you coherently.

Okay, how did your brother say the incident happen?

When my brother called me this morning and told me about the attack on his family, I rushed down there and met the wife who sustained machete cuts while my brother sustained a minor injury.

I had to rush the wife down to the Teaching Hospital in Makurdi. You can see that we are just arriving here and they are yet to admit the woman into the ward.

See her hand as blood is flowing down, the herdsmen cut her in the hand, the husband sustained minor injury but he will soon be here.

They said that the attack at Chile Island happened around 3am on Tuesday; that they were sleeping when some Fulani numbering eight came and attacked them.

Do they have Fulani herdsmen staying in the village?

Yes, there were some Fulani herdsmen staying with them in the village.

According to what they told me, my brother was able to identify the Fulani.  He said the attackers were the Fulani that had been living with them in the community.

How did they know that the attackers were the Fulani staying in the community?

According to what my brother told me, my brother was able to identify the Fulani. He said the attackers were the Fulani that had been living with them in the community for sometime.

And that as day broke they discovered that the Fulani people could not be found.

How many households were attacked?

It is only the house.  They beat up my brother who is the husband of this woman I brought here  and children but the attacker inflicted severe injury on the wife, see her hand, she is in serious pain.

Were there any unresolved problems with the herdsmen?

I don’t think so, (then asked the brother’s wife who spoke in Tiv language)

Did they see the Fulani when the day broke?

No, they all left and no one could trace them.

My brother said that all efforts to locate the Fulani were not successful as there was no one in the thatched house when the community went there at day break.

They discovered that they had all run away although they were just about five persons in the thatched house and they had been around for the past few months.

Are you aware of the attack on Abegana IDP camp on Makurdi/Laafia road?

I was not aware of it until I came here and heard that some herdsmen invaded the camp and killed some people and I have seen some injured ones in the hospital ward.

With what I heard here, they said the suspected herdsmen came to the Abegana IDP camp between 11pm and midnight and that they operated for several hours and the attack on Chile Island, according to my brother happened around 3am, so, I cannot reconcile this but what my brother told me was that their attackers were Fulani that lived with them.

All rights reserved. This material, and other digital content on this website, may not be reproduced, published, broadcast, rewritten or redistributed in whole or in part without prior express written permission from PUNCH.