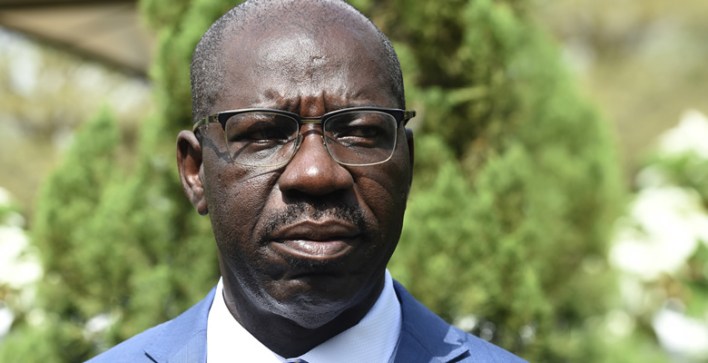 The Governor of Edo State, Godwin Obaseki, has said the mismanagement of the economy is the reason for the level of insecurity Nigeria is currently facing.

He, however, urged Nigerians not to lose hope in the country, but to work collectively to ensure a better Nigeria.

He said this on Tuesday while receiving members of the South-South Zone Working Committee of the Peoples Democratic Party led by its National Vice Chairman, South-South, Chief Dan Orbih.

“We should not lose hope in Nigeria but focus on how to create confidence to give our people hope by managing the country well. The challenges of insecurity just show the dysfunctionality of our federal system.

“We run a federation; we have three tiers of government: Federal, State and Local Governments. Why should security be exclusive to the federal level? What happened to the other two? Until we address that structural imbalance, we are not going to be able to deal with security at its core.”

He continued, “The country has a major problem and it’s only the PDP that can help the President solve the problem but not his party. Let us as party men and Nigerians help rescue the nation and call on those that have the capacity to rescue Nigeria. Security is local and we can rescue this nation; that is why Edo is relatively peaceful.

“In the South-South, we must stand up to defend ourselves economically, politically and security-wise. We have pretenders in the region who try to exploit the region and we must stop them.

“When you concentrate resources at the centre, you can’t get results. The security structure that we have in Nigeria has expired; we need a new security arrangement. The system that we operated till now is not tenable,” he noted.

While addressing the governor, Orbih said, “The South-West and South-East have both formed a security network to protect its people. As South-South, we need to look for a way to check insecurity and protect our people in the region.

“We appeal to you to lead the stand for state policing. It’s time to rejig the security architecture of Nigeria. We urge you to lend your voice to the struggle to make the country safe for all.”